Childe Roland to the Cinema Came


The man in black fled across the desert and the gunslinger followed….


One of the best opening lines to any novel I have read. As a lover of pulp these words sang to me. And I met the news of a film adaption of The Gunslinger by Stephen King with apprehension and anticipation. Both feelings were justified and my concerns were realized with the film’s release. I will try to keep spoilers minimal.


For the five people in the world that don’t know The Dark Tower film is based on a lengthy series of books by Stephen King that he was not even sure he would finish. Of course, I have my opinion on whether he should have or not. Which in turn King said was inspired somewhat by the poem Childe Roland to the Dark Tower came by Robert Browning.


The series follows Roland Deschain, the last Gunslinger, a knight on a doomed quest to save the Dark Tower from the man in black, Walter, a wizard for all intent and purpose. The Dark Tower, a nexus point in the universe that holds it all together is being assaulted. If the Tower falls Darkness reigns. The story brings Roland a ka-tet: his own Round Table, Peers, or gathering of heroes to aid him on his quest. Overall after spanning between our world and Mid-World, to Thunderclap, it all ends badly. The End…..Kinda.


Therein is why The Dark Tower did not perform well. Try to take Lord of the Rings and condense it into an hour and half movie. It took nearly twelve hours of celluloid to do that and many fans were still unhappy.


Had I not read the books, was I not a fan, if I couldn’t have sat back to watch the movie as its own entity, I would not have been able to enjoy it. Even strong acting and imagery can only do so much especially for a summer movie season filled with super heroes and the Star Wars hype looming in the background. That is a lot of heavy lifting for any movie to pull off. 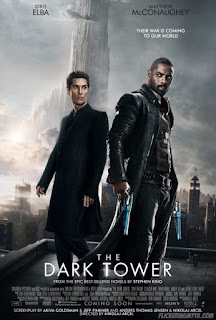 Sony, like many of what should be surefire wins for them, dropped the ball. With, what appears to be over-cautious husbanding of resources and a lack of ability to go big, The Dark Tower is another in a long line of write-offs for them. The Dark Tower should have been as epic as King’s Magnum Opus, but better.


I have railed that every movie does not need to retell the hero’s back story over and over again. We know how Bat-Man and Spider-Man came into being. We know Kal-El is the last son of Krypton. But we don’t know as a viewing public to a film how Roland became the last Gunslinger or that his life has been an inevitable journey to the moment he stood before the Tower and Remembered the Face of his Father very well.


Roland needed his back story, he needed more than an hour and a half to tell his story. The Epic conflict and its world building that was fresh, new and different. There was the haunting familiarity and parallels to this world. So many lost opportunities for Roland’s ka-tet to be explored.


Had Sony slowed down, took their time to tell a more complex story with the promise to offer more, The Dark Tower would have had a stronger draw and would have been a profitable franchise. Instead, they offered a jumble that left casual movie goers scratching their heads, trying to understand what they had just watched.

Leave all the other claptrap behind. I enjoyed the movie from Idris Alba as Roland to Matthew McConaughey as Walter, the Man in Black. Tom Taylor did well as Jake Chambers: Roland’s talisman and apprentice Gunslinger to defeat Walter. The visuals of Mid-World as a world that has “moved on” were well done and the battle sequences showing off Roland’s “little tricks” with his guns were spot on.

Until that strong adaption comes about I wish Roland and his companions Long Days and Pleasant nights.